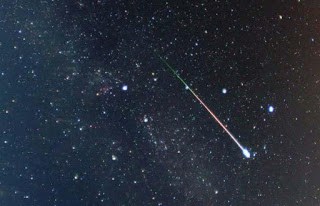 Were you one of the two million people to see the clip from Comedy Central's "Night of Too Many Stars" either last night or before then?  It featured 11-year-old Jodi DiPiazza of Rochelle Park, N.J. -- a talented pianist with autism.  She sang one of her favorite songs for the benefit: Katy Perry's "Firework". And the pop sensation joined her on stage in a magnificent, meaningful duet!  What an emotional few minutes as you considered the appropriateness of the song's lyrics and how far Jodi  -- this streak of light traveling across the sky -- had already come.  Perhaps the journey seemed slow to her parents at times, but we saw her talent flash before our very eyes.

Early Sunday morning was the Orionid meteor shower, and a group of friends and I waited up until after midnight to see it.  We were away from the bright lights of the city, so we were literally beneath a night of too many stars.  We couldn't possibly see the entire speckled sky, and when one of the five of us missed one of the bits of burning debris cast from Halley's Comet, we wondered aloud and with disappointment where it was seen.

Some of the "shooting stars" were spectacular, and others seemed underwhelming.  But we kept waiting and watching, despite the cold ground beneath us and the late hour, because we didn't want to miss "the big one."  And finally, almost an hour into our observation, all five of us saw the most dazzling singular display yet; and we opted to return to the warmth of home.

What if we had given up too soon?  What if we weren't watching the sky together at that moment of time?  What if our experience didn't meet our expectations?

As the parent of two children with autism, one Jodi's age and the other a teenager, I can apply all of those questions to raising these shooting stars.  I was expecting parenthood to be like fireworks: brilliant colors, symmetry and balance, glorious finales.  What I got instead was this never-ending meteor shower -- unpredictable in its highlights, but perpetual in its beauty.  The air might be cool enough to drive us indoors, and the night so long that we want to close our eyes.  But if we wait long enough -- if we widen our perspective -- we'll see that long tail of triumph yet.  And it will keep us there in anticipation of another brilliant success.