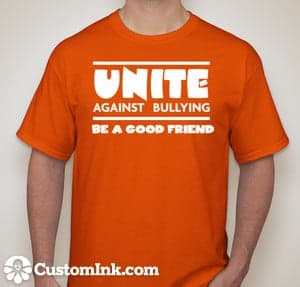 Bullying is not a problem of childhood.  It's not a developmental phase.  It's not a cry for help.  It's "a profound public health problem"; an unhealthy social practice that's been allowed to exist and morph in so many environments that it's become pervasive.  And as a society, we have too many people standing BY and not enough people standing UP when they see these power imbalances.

The disgust with the lack of engagement has reached a tipping point in the last five years.  As a result, new bullying prevention and awareness programs and initiatives are popping up all over the place.  Good Friend, Inc., has been differentiating between disability harassment and bullying since 2007.  But in the absence of a Disability Harassment Prevention Month, we'll piggyback on the Bullying Prevention Month efforts.

On Wednesday, Sept. 26, which happened to be Bullying Awareness Day in Wisconsin, BULLY put out a great "Battle of the Bullied" infographic which put some statistics behind the need for grassroots bullying prevention campaigns.

Stomp Out Bullying™ has initiated Blue Shirt Day™ as a World Day of Bullying Prevention.  So if you're not wearing blue today, you've missed that opportunity.  But don't fret -- you can (and should) still wear orange on Unity Day, Wednesday, Oct. 10.  And you can do something on an even grander scale during this month, which is National Bullying Prevention Month.

Some people might be feeling inundated with requests to draw attention to bullying and prevent this epidemic.  If you're one of them, please let me know which day we can stop thinking about the social emotional health of our children.  Let me know when we should stop offering practical tools to bystanders so they can intervene in a bullying situation.  Tell me when our children's safety and relational aggression are no longer concerns.

For the rest of you who will heed the calls of these wonderful organizations and join in demonstrations of support, be sure you post pictures of your blue or orange shirts on our Facebook page, or tweet them with hashtag #GoodFriendInc.