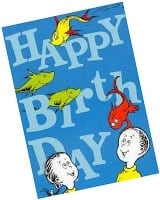 Since March 2 is a celebrated day in American literature, I thought I'd take this week's blog and make it an homage of sorts to the late great Dr. Seuss (Theodor Seuss Geisel).  His books have been favorites on children's lists for generations, and many a memorable quote are immortalized.  One of my personal favorites (though arguably misattributed to Seuss, as there is no citation) adorns each of my children's bedroom walls in a frame:

Be who you are and say what you feel because those who mind don't matter and those who matter don't mind.

Here's why, as the mother of two children with autism spectrum disorder (ASD), I believed this was so important to impart to my kiddos.  At the time, both of my young children were receiving intensive, in-home Applied Behavior Analysis (ABA) therapy.  The team meant well as they made program goals for them, including one for my daughter to replace her self-stimulatory hand-flapping behavior with something "more appropriate."  As we all worked harder week by week to get her to recognize the behavior as odd, it occurred to me that we were asking a 6-year-old to perhaps be more self-conscious than was necessary.  After all, shouldn't her peers accept her for who she is, hand flapping and all?  And if she could explain this behavior had purpose, which she told me helps her use her imagination, shouldn't that be good enough for her friends and caregivers?

I decided it was indeed good enough, and we stopped that program.

My children have differently-wired brains.  There is likely no amount of ABA that will graduate them off the autism spectrum.  Indeed, the interventions we've employed, including ABA, have made mind-boggling differences in their abilities -- particularly in the case of our now 11-year-old daughter.  But to insist they repress their uniquenesses for the sake of universal acceptance is to deny their thoughts and feelings -- to ask them to be other than who they are.