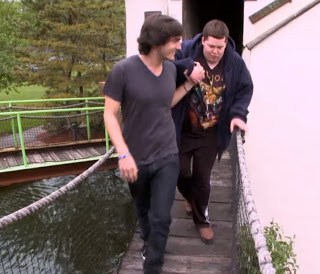 In the HBO Films movie Temple Grandin (2010), opening doors is a thematic image.  Since Temple is a visual thinker, she latches onto the metaphorical concept of doors opening to new experiences.  As she walks through door after door on her journey to her life's work, we see how many people were there to guide her to or through those doors.

After watching the season premiere of "World of Jenks" on MTV last week, I saw a new thematic image in this journey of supporting people with autism: crossing bridges.  Andrew Jenks, the documentary film maker whose immersion in the lives of young adults is the subject of his MTV series, is following three 20-somethings this season: Kaylin, a cancer survivor and fashion designer; D-Real, a dancer and community activist; and Chad, a young man with autism going through the "Transition" from secondary education to whatever comes next.

Chad espouses in me thoughts of my own 14-year-old son, who's staring ahead toward his high school years.  Watching Jenks with Chad reminds me of my son's daily living skills mentor.  She challenges him to try new things, as Jenks did with Chad in that first episode.  Jenks learned that Chad loved to visit The Castle, an amusement park of sorts with a miniature golf range.  There's a suspension bridge there, and as Chad is afraid of heights, he didn't want to cross that bridge.  He was accustomed to finding another way.  But Jenks encouraged him to try -- even offering to hold Chad's hand as they crossed together.

Chad's anxiety-ridden face transformed at the other side of the wobbly structure.  The glow of pride came over him, and the sparkle of joy.  Once he experienced that exhilaration, he wanted to go back over and over that bridge -- without needing Jenks' support.  Chad saw the fun in something he was previously adamant that he couldn't or didn't want to do.  But he might never have had that experience if Jenks weren't there for him.

I am excited to watch Chad cross many bridges this season through the World of Jenks window.  And as sad for Chad as I will be when Jenks is no longer there to help him cross bridges, I will trust that others will fill those shoes.  Maybe it will be a job coach or vocational services counselor.  Maybe it will be his girlfriend or a "neurotypical" peer.

And I know my son's daily living skills mentor won't always be there to challenge and support him as he tries new things.  I hope Jenks' audience is inspired to befriend and support the Chads, like my son, of the world.  Because they can do and experience so much more than most of us have ever given them credit for.