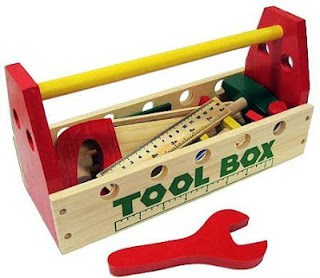 Last week, I had four enormous spruce trees removed from my yard.  The work crew arrived at 9 a.m. and by 2 p.m., all that remained were four piles of fragrant, shredded mulch.  Even if my husband and I possessed the skill and knowledge these gentlemen had, there's no way we could have done the same job.  We didn't have the right tools.  These guys had enormous chainsaws and bow saws and stump grinders and cranes.  They had cherry pickers and wood chippers and hand trucks.  And muscles -- big ones.

Anyone who works with tools, whether in a kitchen or a garage or at a desk in front of a computer, will tell you how important it is to have the right tool for the right job.  Wrong tools for the right job and vice versa will be useless.  Why do we think this is any different for our children?

Our children need tools for their social-emotional toolbox.  Noticing the social impairments in children on the autism spectrum, caregivers developed social skills training.  We were equipping students with autism with tools we assumed they could use with their typically-developing peers.  In some cases, it was a case of right tool, wrong job; we were equipping students for the job that comes after social understanding.  It was kind of like handing over the chisel before we gave them the mallet.  And they looked at the block of stone, glanced at the chisel and thought, "Why do I need this again?"

Somehow, we missed the importance of putting the tools of awareness and acceptance in our typically-developing kids' toolboxes also.  We sent them to school with their pencils and paper and crayons in the backpack without explaining the differences between learners, and how important it was to accept each of their classmates regardless of those differences.  It didn't seem to matter much when the kindergarteners walked away wide-eyed and turtle-shelled with their big backpacks.  Even in first grade, they interacted mostly with whomever they were near.  And we assumed they just understood their classmates with differently-wired brains.

Boy, were we wrong.

They have all sorts of problems to solve, but no tools to get the job done.  Without the right tools, they'll chip away at the block of stone without much skill or finesse, and we'll wonder why they've been unable to produce a masterpiece.  They did the best they had with the tools we provided.  Had we put the right tools in their toolboxes and showed them what each was for (think Peer-Mediated Instruction and Intervention), imagine what the finished result might have been!

I think it would have looked like meaningful inclusion.  Let Good Friend help you equip your students for an inclusive classroom in the 2012-'13 school year by scheduling staff and student services to take place immediately in the fall.  Contact me or Denise before school's out for the summer!