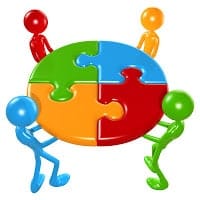 There are many arguments why self-contained classrooms for students with special education needs are valuable and qualify as the least-restrictive environment (LRE) for educational placement.

There are more reasons why inclusive education is valuable, which drove the discussion of LRE in the Individuals with Disabilities Education Act (IDEA).  One of the reasons -- self-perception -- reaches the core of my being.  As a high school student, my brother and I attended the same public school.  The achievement-oriented culture of the school was focused on two things: college and sports.  If you were the student who was college-bound with good grades and/or played well on one (or more) of the school's sports teams, you were looked upon favorably.  If not, you clearly did not enjoy the same staff-offered perqs (such as benefit of the doubt, homework forgiveness, basic respect, etc.).

I was a nerd.  I answered the teachers' questions in class, went to the summer camps devoted to intellectual or career pursuits, and was the school board student representative.  My not-much-younger brother was seemingly the opposite.  He wore provocatively-messaged t-shirts, used the breaks in the day to head outside to smoke a cigarette (which you could do legally back in those days), and ended up in a high-risk program to at least get him to graduate with a GED.

There was one teacher in particular who seemed to thrive on berating my brother.  He would stand at the end of the hallway and hurl insults with a half-cocked grin of satisfaction on his face directed at the college-bound and athletically-gifted students who passed him.  He was encouraging them to join in the ridicule not only by his initiation, but by his body language's approval.  This was a core curriculum teacher whom I otherwise considered rather effective in the classroom.  I knew it was wrong then, but lacked the practical wisdom (and frankly, authority) to counteract the bullying behavior.

While my brother's teachers made accommodations in the classroom, and special educators assisted as needed, he was particularly uncomfortable about his placement in a study hall of sorts for students with special education needs.  There were students at all grade levels and with all manner of disabilities in this classroom, and the teacher went amongst them to offer assistance with and re-teaching on curricular assignments.  My brother said he used the time to sleep, because he figured that's all his teachers expected of him anyway.

He had begun to believe the propaganda a few insensitive teachers were publishing about himself -- he would never amount to anything; he wasn't smart enough to do the classwork; he'd be lucky to get a diploma at all.  What a sad way to glimpse your future when you're only 16.

I asked my brother if he ever thought about what might have happened had his teachers established higher expectations and held him accountable for class work.  He said he didn't think about it from that perspective much; but he still has nightmares about the administration calling him back to tell him he didn't really finish high school.

I know it's controversial to call placement in a self-contained classroom segregation of students with special education needs, but if the argument is anything but "the nature or severity of the disability of a child is such that education in regular classes with the use of supplementary aids and services cannot be achieved satisfactorily", then the child is being set apart from his or her typically-developing peers in a manner out of compliance with IDEA.  And that state of being set apart sends a message, albeit unintentionally, that students with special education needs don't belong with their typically-developing peers.

Watch for Part 2 next week, when we'll discuss this idea in connection with Jane Elliott's blue eyes/brown eyes classroom exercise.