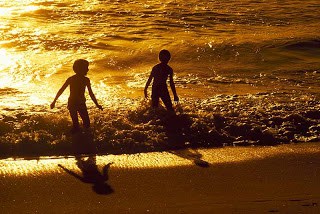 One of the more remarkable things about my (almost) 11-year-old daughter is how well she knows herself.  In fact, there are things she tells me about the way her brain works that astonish me, and give me keen insight into why other children with autism spectrum disorder might respond in certain ways to environmental stimuli.  For example, I opted to flat-out ask her a couple of years ago what was going on in her brain and/or body when she flaps her hands.  This behavior (sometimes called a "stim" or "self-regulating"), which we as parents first observed when she was approximately 10 months old, accompanied anything from watching bubbles being blown to water splashing in her toddlerhood, lining up plastic toys in early childhood, and drawing as an elementary school-aged student.

"I'm using my imagination," was my daughter's response to the query.  And the expression on her face was one of disappointed shock, as if to punctuate with a "Duh!".  I dove deeper into her account.  She explained that lining up her Barbies while they were all facing her allowed her to retreat into a creative process where the dolls could move and talk instead of having to be manipulated.  And there was a lively setting rich with sounds and smells and experiences.  There was no way to create all that physically; but in her mind, it was all happening.  And it was wonderful.

Her knowledge of her self is the beginning of self-advocacy.  Because knowing how her brain works well (or not), and knowing how that compares to other students, can be used to craft learning environments and teaching methods into something functional for her.  She knows that too much noise (students shuffling papers, talking amongst themselves, etc.) makes it impossible for her to process thoughts.  So when she's feeling overwhelmed, she's learning to make some assessments about her environment and ask for an alternate workspace if needed.

Not all children with ASD are as adept at communicating their unique needs (and neither was my daughter, frankly).  But it's never too early to begin to get them to recognize signs of stress in their bodies and help them and their education/care team identify alternative activities or adapted experiences to maximize success.

Using a common language is important, so the student can express him-/herself in a way everyone can understand and respond to appropriately and in a timely fashion.  If a child is unable to evoke the desired response, he/she is unlikely to continue attempting to use budding self-advocacy skills.

Good Friend's videos can help families and educational teams establish a common language.  Using the vocabulary and principles in the elementary and secondary version of our films can be a starting point for self-awareness.

The better a student understands him-/herself, the less dependent he/she will be on the care team to recognize signs of distress and the more likely a successful outcome will result from an inclusive atmosphere.  This will be especially important at the beginning of the school year, when the new educational team will not know the student very well and will be responsible for getting to know a classroom full of learners.

Students with "the right stuff" (as it pertains to self-awareness and advocacy) will have a better sense of control when the unpredictability of September crashes on them like a breaking wave.  Their feet will be properly positioned to withstand the rushing waters.  Here's to a summer of preparing those balancing skills!