The Beauty of Laughter

If there's one thing I've learned while parenting two children with autism spectrum disorders, it's that laughter is as important as the air we breathe.  I've encouraged my children to find the humor in jokes and have explained to them why others laugh at certain parts of movies or commercials.  And, as two people with extraordinary capacity to memorize parts of TV shows or movies, they make one another laugh with their recollections of bits that appeal to them -- usually without anyone around them understanding what's so funny.

I've often said to young ladies dear to me that they should marry the man who makes them laugh (once all those common sense requisites are satisfied, of course).  It is that quality that remains long after physical appearances change, and can take difficult circumstances and shine a ray of light and hope.  A well-timed laugh, as long as it's at no one's expense, is good for the soul.  It reminds us not to take life so seriously.

If you were anywhere near a TV or social media in the last week, you've heard about Alexis Wineman.  She's the 18-year-old woman who represented the state of Montana in the Miss America competition over the weekend -- and she has autism.  The sweetheart of Big Sky Country captivated the hearts of the disability community as well, inspiring youth with differences to stretch themselves toward big dreams.

In her ABC News interview, she discussed her talent for the competition: stand-up comedy.  She told ABC News' David Muir that as a child she preferred to be alone for fear of being laughed at.  But in overcoming some of her autistic symptoms, she's overcome some fears as well.  She said of her pageant talent choice, "I realized, if I laugh at myself, then that's okay." 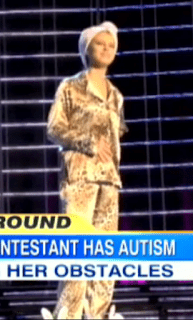 I wish I could say I saw her routine, but her talent was not for exhibition during the telecast.  Though she won America's Choice through an online voting contest, she didn't advance beyond the final fifteen.  But seeing her clad in glamorous pajamas with a towel wrapped around her head on the Miss America stage in Las Vegas during the preliminary phase made me smile.  She never looked so beautiful to me.

Alexis ran on the platform, "Normal Is Just a Dryer Setting - Living with Autism."  Thank God, Alexis, you are not normal.  You are extraordinary!

The last word comes from Miss Montana: "A girl who has a few differences is Miss America material, no matter what they are!"