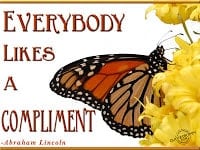 The Power of Compliments

This week, I'm going back to Tony Attwood's presentation ...

So many of the things he said during last week's seminar resonate beyond the population of individuals with ASD.  He spoke of the importance of compliments in relationships, particularly as they apply to romantic relationships.  In fact, nearly 15 years ago, he worked with Carol Gray to develop a prescription of sorts for compliment formulation and delivery for adults with ASD, available through this download.  The argument for the necessity of such a manual is rooted in both the complexity and the benefits of compliments.

But the practicing of compliment delivery is littered with subtleties that sometimes we neuro-typicals take for granted.  Questions arise:  How many compliments should I give in a specific time frame?  And what should I compliment someone on?  Does it matter if the compliment is given to a man or woman?  Are certain compliments inappropriate to give to a stranger, but okay for a close friend? ... and many more. 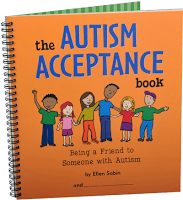 When we were developing Good Friend's curriculum for Peer Sensitivity Workshops five years ago, we were inspired by Ellen Sabin's inclusion of an exercise in The Autism Acceptance Book that encourages classmates to compliment each other.  When we practiced this in schools, we were dismayed by how difficult it was for elementary school-aged students to understand and deliver compliments.  They, particularly the girls, have little trouble complimenting an article of clothing or a hairstyle, but speaking about character or skills in a kind way is clearly not an inherent ability for most students.

Imagine how much more difficult it can be, then, for these NT peers to compliment their classmate with ASD!  With the societal disorder of seeing differences as deficiencies, looking for the expressions of praise or admiration for a person with autism seems foreign.  But when given the proper focus on a person's strengths instead of his weaknesses, the compliments flow freely.  And since Tony Attwood notes that people on the spectrum crave positive feedback and are desperate for respect and value, we who surround these individuals should be lavishing compliments on them as well.

What was the last compliment you gave your person with ASD?