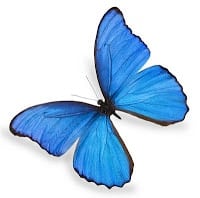 This week's post is the kind that will make you science types cringe.  I'm going to get all metaphorical with your physics and play on words held by theories because I like the way it sounds.  So there.  But stick with me.

Last week, I gushed about the touchdown play my son's team orchestrated for him during a recent flag football game.  Let me tell you how that ten-second huddle will lead to the meaningful employment of an adult with autism 20 years from now.

First, a little something about the butterfly effect.  The general idea is that the flap of a butterfly's wings can impact weather patterns somewhere else in the world.  The thought of the gentleness of this silent flight rousing a tempest espouses chaos theory talk that's way over my head, but I can grasp the impact on atmosphere.

In sociological terms, we think of the ripple effect.  Someone touches their community with a charitable act, and the outgrowing concentric circles create pay-it-forward waves of goodwill.

Think of that touchdown play as something larger than passing a ball.  Consider the egos that were set aside in order to build another's up.  Take a moment to realize the cooperation, the belief in the underdog, and the flexibility these teens exhibited.

Managers -- when you're putting a team together at work, don't you want to choose the players who know how to work together and focus on each others' strengths instead of attacking weaknesses?  Don't you want to reward the adaptability that leads to the desired outcome?  These are the qualities of leaders.  And the employees who clinch the deal and look back with gratitude at their colleagues who helped put it together are the ones who earn respect and work with humility.

When your student with autism applies for a job someday, he may interview with the quarterback for my son's flag football team.  And that young man will think of the day he huddled his teammates behind that line of scrimmage, and gave a kid with autism a chance to be the team hero.  He'll remember how little they as a team had to change to make a world of difference for my son.  And the difference my son's joy made on that 8th grader's heart will encourage his adult self to hire your student with autism.

All because a butterfly flapped its wings.