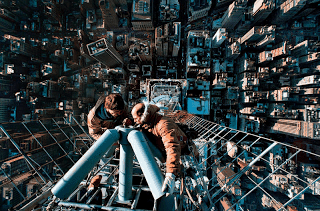 Who knew?  Who knew that what started out as an awful world-spinning, head-dizzying week could end with me having a better understanding of what some people with autism must experience?  On Tuesday, our family had scheduled a fun-filled day at an amusement park complete with water park.  We were excited!  We had worked it out so my son's therapist could join us, in case our two children with autism spectrum disorders required us to divide and conquer.  What we didn't really plan on was Mom ending up with vertigo before we even walked through the gates.

Yes, what seemed like an adventurous string of three thrill-seeking roller coaster rides turned into a nauseating nightmare.  I guess I should have known by the near stumble up the ramp to the second coaster that my inner ear was far less amused than my brain, but I chose to ignore the dire warning and pressed on.  And on.  Until fail.  Literally.

So the 80-minute ride home was a malignant medley of starting and stopping and snack smells and horn blows, endurable only with my eyes closed and focused deeply on my breathing.

A couple days later, when my thoughts could focus on other than the symptoms and side effects of vertigo, I recalled what Judy Endow had presented on at the 2011 Autism Society of Wisconsin Conference.  She talked about her experience traveling to New York City.  She showed PowerPoint slides with tall buildings contorting and swaying, noting this animation was similar to the experience she had.  She needed help to get onto and off of public transportation.  And by the time she got to her hotel room, she was exhausted.

So many of us take our senses of balance and proprioception ("the sense of the orientation of one's limbs in space") for granted.  We know when we're upright and when we're seated.  We understand, without having to think too hard, that our feet are connected to our legs, which are firmly attached at our hips.  And yet, a touch of vertigo can flip all those senses.

And what of our children, students, or friends with autism?  These connections to the exquisitely sensitive inner ear in individuals with different brain wiring could certainly mean that feedback regarding parts of their bodies and steadiness is unreliable.  And if that feedback were a sense of disconnection, dizziness, and/or nausea, isn't it reasonable to think that associated "behavior" could be holding onto walls, lack of awareness of personal space, or avoidance of certain motion-related activities?

When I think of all the things people with autism must feel without being able to successfully communicate those sensations to us neuro-typicals, I am urged to do better to understand and make accommodations for their differences.  I encourage you to do the same.